I made that reading queue a little while back, if you recall. If you do not, you may find it here.

Well,  I’m reaching out to my readers, because I honestly haven’t been flying through that list like I thought I would.

Despite the fact that I have wanted to read some of the books in my queue for a while, I still am having a hard time motivating myself to read them.

There is definitely a part of me that would rather make chex mix, because it is not on a list, than read a book that is on a list.

Lists may not be my thing.

So far, I have read about 3 or 4 books from that list I made and then published, and about 5-7 books not actually on my list at all, but that have just intrigued me in the meantime.

I keep finding other books that make me say, “shoulda put that one on the list.”

I’m pretty sure that I’m also, on some level, using those other books as a way of procrastinating the reading on my queue.

It’s not that I don’t want to read the books on the list anymore, but only that they are in list form, and hence somehow less appealing to me.

However, in a roundabout way, the list has inspired me to read. I have been buying more books than I was before, and I have been reading more frequently, which was the whole point of the list.

So, at least I have part of it down.

Part of me feels embarrassed, but another (larger) part feels excited to be reading anything, and to not have to follow or be tied down to a specific list, to instead read whatever I feel like. To read outside the numbers and lines I set up as guideposts.

I still would like to read those other books eventually, but may not get to them in any specific time frame or order.

Yours with Chex Mix,

I recently found a used book store over in the University District at Magus Books, and had a lovely time browsing the shop for quite some time.

I was most excited when I found two old twin books from the same publishing run, Oxford 1932, for a very good bargain. One is Robert Browning’s Poems, and the other is Elizabeth Barrett Browning’s Poetical Works.

They are so fun I wanted to share them with you. Ta da!

The gold insignia on the cover of each, very simple and elegant. 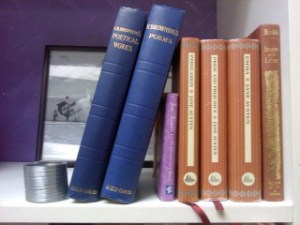 Don't they look lovely there?

I was interested in them originally because not only are they beautiful and well-looking together, but because of the titles. The super nerd in me noticed immediately that the titles are gendered.

Apparently, despite finishing my masters, I am still interested in examining the language of gender.

Not only does the second title sound more whimsical, it implies that the works are more sentimental, or more feminine. It could also imply, because it is similar but longer than the word “poems” that her work is “Poem- ish.” At first it doesn’t seem like an important distinction, but the more one thinks about it, the more of an interesting move the distinction becomes.

The covers and books in most other manners look about the same. Here are some pictures: 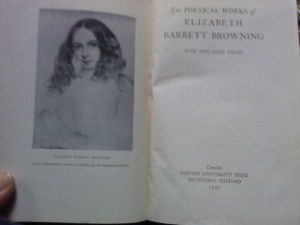 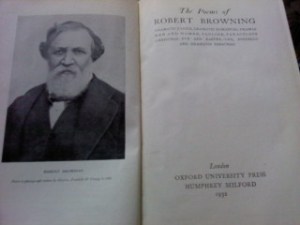 As you can see, Robert’s title page has more wording, and is more specific about the works included in his volume. Elizabeth’s has less specific information under the title, and just says “With two prose essays.” So, his work was definitely given a bit more title page respect, although I am not sure that EBB was as well known until later.

I am wondering- does any scholarly reader or historian know when EBB was becoming more popular in the 20th century? I know that manuscripts I read certainly painted this couple as one of interest, and there seemed to have been a very large following of both RB and EBB, so I’m wondering when reception shifted. Of course, there was major bias in the discussion of EBB’s work in periodicals and etc., because she was not only somewhat foreign and seen as eccentric, but was also a female writer.

Btw, the text in both books looks the same:

Both have sort of a newspaper or periodical quality to them, and are somewhat biblical in their formatting.  Both books have similar font, and the same layout throughout. EBB’s is shorter altogether in page length, but many of her most famous poems like “cry of the children” are included.

Hope you enjoyed my discovery, and if you know the answer to the above query, please pitch in through comments!

Error: Twitter did not respond. Please wait a few minutes and refresh this page.

what we say a lot

Please give attribution when using my original photos. Most photos I post here are my own, and I have the rights to them, unless otherwise credited. All photos and stills from movies are used from other Creative Commons Licensed sites, and are in the public domain if credit is not specified.

This work is licensed under a Creative Commons Attribution-NonCommercial-NoDerivs 3.0 Unported License.

I write here too: